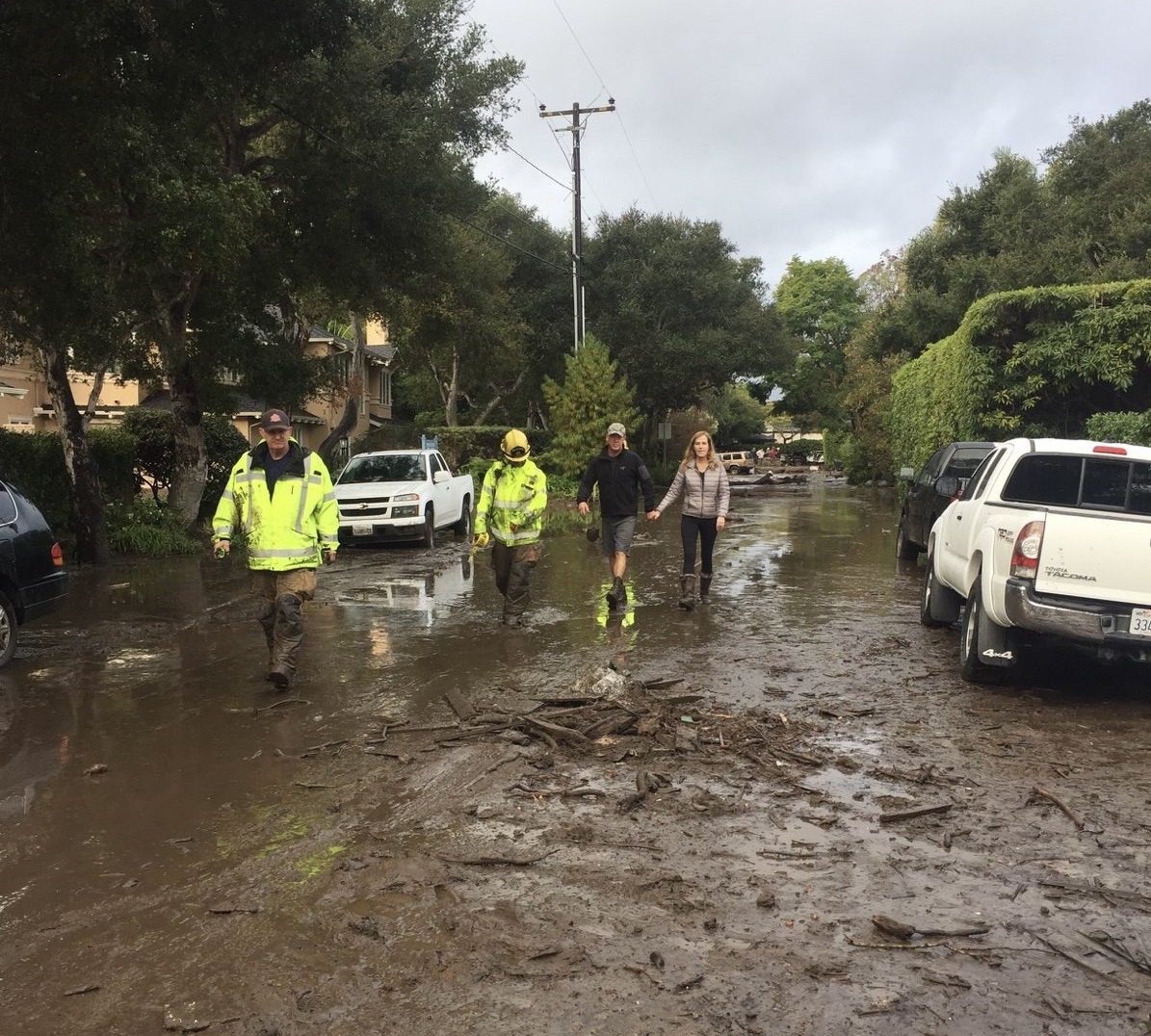 “If you can’t be in awe of Mother Nature, there’s something wrong with you.” Alex Trebek

The rain is pounding on our Montecito home. Our cell phones are telling us to evacuate now. Leave the area; roads are blocked, schools have been evacuated, and evacuation shelters have been set up; this rings a bell too deep, too soon, or is it? The rain is unrelenting, and I pace our warm house with unshakable memories. Our car is parked facing out if we have to leave in a hurry. However, the roads are flooded, and we must consider what route could be safe.

I am a bundle of nerves. The Montecito Mudslides’ memories will forever imprint on my heart. I had never seen such destruction from rain, mud, and previous fires coming together to cause chaos and death in our small town.

January ninth marked the fifth anniversary of the Mudslides.

Our personal story. We were living on Danielson Road in Montecito. Our son-in-law called us at 4:00 am to tell us to look outside. What we saw was that we could not register. Through a downpour of rain, there was a fire in the sky. We looked in wonder, then went back to bed. Our son-in-law knocked on our door. It was 7:00 am. He told us to put on rainboots and walk around; our world had been destroyed. He went home to his wife, my daughter, and their new baby boy.

My hubby and I were very quiet as we stepped outside our home. Massive boulders, fallen trees, and crushed cars annihilated our small street. We were ankle-deep in mud as we encountered bewildered neighbors and first responders. No one at that point knew what to do. Our freeway was deep in the earth, and wrecked cars were scattered about. I walked over to a woman police officer to thank her for her service as she was standing over a yellow body bag. The rain was gently coming down. It did not hide my tears. We then went past the train tracks to the oceans to see dark mud for miles surging about with holes in the walls of the Biltmore and cars that had been rolled about like children’s toys.

On Coast Village Road, placed on the sidewalk, appeared what was once a car mangled in a haunting fashion. The freeways would remain closed for weeks; twenty-three people died on that fateful morning of January ninth. We walked home, and I went into shock. Anxieties filled me from head to toe; I did not want to leave my husband’s side. I melted down inside and had to go with whatever would happen next. We were evacuated, and with a couple of days of hesitation, we left our sweet home to go to Rincon Point. My daughter, her husband, and the baby would follow as we held up for nearly a month. Our world was torn up very quickly, and it was hard to process the muddy destruction we witnessed.

The light that shone brightly at four am was a broken gas line that I was told saved people’s lives as they could see the mountain coming down in a rush of mud.

Our creek beds are well-working and now to the brim five years later, and we expect rain for days. I know this much stay home. Do not try to drive out or walk about. That is where unpredictable rivers in the streets can happen.

During the last storm, my husband and I sheltered in place, watching movies until the wee hours of the morning. It is good to know your neighbors and have an exit plan.

My Mantra: “It is not what happens to us and around us; it is what we learn and how we respond.”

♬ Send Me on My Way – Vibe Street